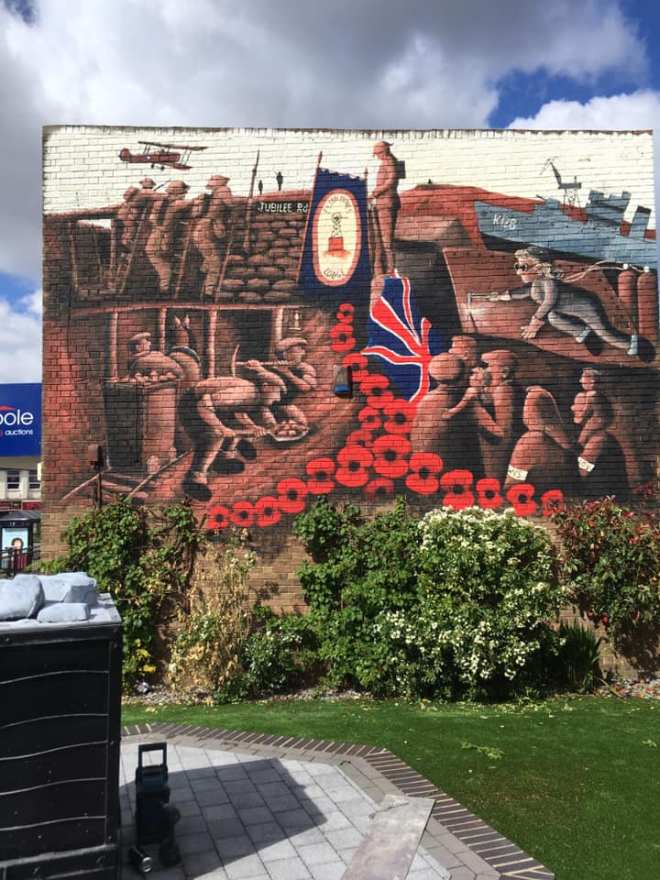 Philip Meadows is a local Teesside artist based in Middlesbrough who focuses his painting on his childhood memories growing up in Middlesbrough in the 1960s. I caught up with Philip to find out more behind his latest artwork the Eston war mural.

What’s the story behind the mural?

I was asked by the Eston Remembers Committee to produce the mural. They knew of my art work and that I lived in Eston. We went for a general theme rather than purely military as many Eston residents worked in reserved occupations. Mining, steel making and ship building were important jobs. It allowed me to focus on the iron stone mining without which Eston and Middlesbrough wouldn’t exist.

What was like to do a mural piece of artwork?

People are impressed with the size of the mural. In reality is just a big painting. The important thing is the design and the harmony of the colours. If it works in your sketch book it will work on a wall, it’s just bigger. You measure the wall and decide on a scale then scale your drawings to the chosen scale. My scale was 4cm on the design to 1/2 metre on the wall. You can then start anywhere on the painting. The difficulty is making sure all the individual squares gel together.

Can you tell us what the mural is about ?

The mural focuses on the past but the effect it has had around Eston within the community highlights the good influence artwork can have. Historically we need to remember the past then we won’t make the same mistakes again. There is a memorial in Middlesbrough town hall to people who fought in the Spanish civil war against Fascism. Had the government listened to our volunteers in 1936 and taken a different tack with the Nazis the 2nd world war would not have had to be fought.

If you are wanting to pay the mural a visit it can be found in Eston Square when coming from Redcar. You can’t miss it.